It is depressingly apparent that powerful forces in the global economy are set to carry on with the exploration for and use of fossil fuels as a primary source of energy for decades to come. Oxfam has produced a report identifying the confluence of fossil fuel companies, governments and investors which givers momentum to the disastrous course along which we are being impelled.

Food, Fossil Fuels and Filthy Finance pulls no punches. It points to the evidence from the Tyndall Centre that, in the absence of an unprecedented change in the global use of fossil fuels, we are heading for a global temperature rise of 4 to 6 degrees by century’s end.

Warming at this rate would leave hundreds of millions of the world’s poorest people at risk of severe hunger and drought by 2060. Even 2 degrees is going to have widespread human impacts and cause serious setbacks to development. The ‘hunger costs’ of fossil fuels are set to be the most savage impacts of climate change for millions globally. Farmers in many African countries are likely to see decreases in yield decade by decade, in spite of adaptation measures. The report details much more by way of cascading adverse impacts on populations least equipped to cope with them. It also points to severe economic and business risks in store for the developed countries as climate change begins to bite in their regions.

END_OF_DOCUMENT_TOKEN_TO_BE_REPLACED

At first glance, it sounds refreshingly like a policy that takes anthropogenic global warming seriously. From the announcement:

“This is about future-proofing our economy. Making the transition to a low-carbon clean technology economy is not a ‘nice to have’ as the current Government would have us believe. It is a transition we must make and the sooner we begin, the easier that transition will be.”

How did the media respond? Well they ignored it. I haven’t seen any reporting of Labour’s climate change policy in the Herald, or Stuff/Fairfax, or Radio NZ or TV1 or TV3. I only stumbled onto it via Scoop a week after the release.

Like the 2011 election, the issue of climate change has been notable for it’s absence (the snake swallowing the elephant in the room).

However, some climate change focused NGOs responded positively to Labour’s policy. Simon Terry at the Sustainability Council said a carbon budget was the single most important reform. Generation Zero and the Iwi Leaders Group and forest owners welcomed the policy. The mainstream media of course also ignored these NGO views.

However, before I get into the detail of Labour’s climate change policy (a topic for another post), it’s important to ask “are the dots connected with Labour’s energy policy?” Unfortunately, the dots are not connected and the energy policy is 180 degrees contrary to the concept of a carbon budget.

END_OF_DOCUMENT_TOKEN_TO_BE_REPLACED

The growing disconnect between the NZ government’s promotion of New Zealand as a 100% Pure tourist destination, and its desire to see more offshore oil and gas exploration and increased mining for coal and minerals is certainly attracting attention around the world. Graham Readfearn’s article New Zealand pushing plans to drill Middle-earth as Hobbit filming ends is top environment story on the Guardian web site today. Readfearn riffs on the completion of filming for the last part of the Hobbit trilogy, set against a frankly astonishing promotional video by PM John Key, in which he waxes lyrical about our beautiful country, and then describes how he’s committed to ruining it. Have a look: it is — as Greenpeace NZ noted — beyond parody.

Readfearn’s not the only one to notice: climate campaigner Bill McKibben tweeted “NZ doing its best to become a junior league petrostate, talk about bad timing” to draw attention to a 350.org blog post about Key’s tasteless little video.

The foolishness of trying to build an extraction economy around fossil fuels at a time when the carbon bubble — the over-valuation of carbon reserves by oils and coal companies — is beginning to gain traction in financial markets is all too obvious. Investing in assets that will be stranded by the inevitability of action on climate change is a strategic nonsense.

Unfortunately that’s part for the course for a government locked into an outdated set of political ideas, wedded to a world-view that considers action on emissions optional. Unless they wake up and see the world changing around them, they will find themselves as stranded as the tax payer funds they plan waste by subsidising fossil fuel exploration and extraction. 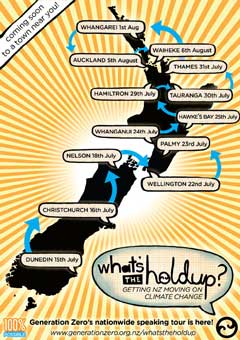 Youth-led climate campaigners Generation Zero have just finished the first week of their nationwide What’s The Holdup? speaking tour1 — an attempt to start a national conversation about action to reduce emissions. Here’s what the group has to say about the tour:

In between extreme weather and rising oil prices, countries around the world are making a shift towards renewable energy – but New Zealand is lagging behind. Tackling climate change for many Kiwis feels like an impossible task. But together, we can create the movement to change this and bring forth a thriving New Zealand we are proud to hand on to future generations.

The facts say that it’s 100% Possible to move beyond fossil fuels – but we need leadership at every level, from entrepreneurs and business leaders, from communities, and from the politicians we elect.

Generation Zero will initiate a conversation with the country. New Zealanders young and old are invited to hear young people and experts talk about the solutions to climate change, and what each one of us can do to make a difference.

It’s 100% possible to create a thriving New Zealand beyond fossil fuels. So what’s the holdup?

Here’s the schedule for the remainder of the tour:

All events start at 7pm. For more information, sign up here.

I signed off regular writing for Hot Topic some months ago. But failing eyesight doesn’t mean failing concern, and my anger at the way our government heedlessly pursues the expansion of fossil fuel exploration led me recently to reflect I could still see sufficiently to write letters to editors. Publication of a letter by the NZ Herald emboldened me to try something for the dialogue page. It wasn’t accepted, on the reasonable  ground that they were about to publish an article by Jim Salinger which they described as along the same lines.

However I thought Hot Topic readers might be interested in my attempt to attack the government on moral grounds. I acknowledge that politics and morality make uneasy bedfellows, and that moral absolutism is hardly a suitable tool for political effectiveness. Nevertheless sometimes issues arise where shades of grey can legitimately be challenged by something closer to black and white, and that transition is certainly much earlier along the path of fossil fuel exploitation than our government (and many other governments) is currently inclined to allow.

The moral appeal is strongly made by many who write and speak on the climate issue. Al Gore sounds it regularly. Among the many books I have reviewed on Hot Topic I recall being struck by what William Calvin’s book Treating a Fever had to say on the question, as I summarised in the review:

“He also pins hope on religious leaders coming to see that climate change is a serious failure of stewardship and our present use of fossil fuel is a deeply immoral imposition on other people and unborn generations. Their arguments will trump the objections of the vested interests, just as they did when slavery was ended in the 19th century.”

Whether there’s any hope of an onslaught by religious leaders in church-going US, or for that matter in less religion-oriented NZ, is hardly yet clear, but the appeal to morality can be sounded just as well by those of no religion, and is worth making if we set any value on the finer human traits.

Here’s the piece I submitted to the Herald. Hot Topic readers will understand that it was written for a general public audience.

END_OF_DOCUMENT_TOKEN_TO_BE_REPLACED

Bad Behavior has blocked 1159 access attempts in the last 7 days.