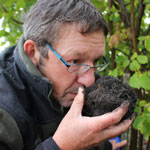 It being the weekend that truffle growers from all over New Zealand meet to discuss their trade and to eat the fruits of their endeavours, I will be absent from the Hot Topic helm for the next few days. Please use the occasion to discuss anything and everything climate-related, from the state of the climate to bizarre holes in Siberian tundra that may be caused by dragon breath… Keep it polite, please.

Bad Behavior has blocked 1214 access attempts in the last 7 days.