There is much ado at Tannochbrae Manor, because the Laird has once again disproved global warming. One equation is all it takes! And an article in a new Chinese science journal with some friends, and lo!

Take away that inappropriate and misapplied equation, remove the unjustifiable tripling and the climate “crisis” vanishes.

You couldn’t make it up1. Although the Laird is a past master of self-parody, his triumphant article at WND is really something else. But enough: there is much ado at Tannochbrae Manor, because Scrotum has returned!

It’s been nearly two years since the last of my Monckton tales, and fully six since Old Scrotum first trod the boards at Hot Topic, so it’s a great pleasure to see someone else picking up the characters and beating around the bush with a pheasant in the hand and a peasant in the pocket. Izen has summoned the wrinkled retainer from retirement in order to help him express his astonishment at the chutzpah of the good Lord in writing and promoting his latest opus, which is being widely greeted with yawns — and some preliminary debunking. There will be more.

There may even be more from Scrotum. I hear rumours that the Laird’s attempts at spoken Mandarin are not going down well… 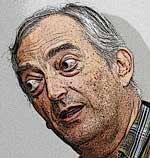 END_OF_DOCUMENT_TOKEN_TO_BE_REPLACED

Scrotum stood looking down King Street towards St James’s Square. The spring wind was chill, and the young leaves on the trees in the square were struggling to look green. The old fashioned street lights gleamed on the rain-swept road and glistening pavements. He pulled his collar up around his neck, tugged at his trilby and shivered. This was no night for an assignation, this was a night to pour the Laird a stiff snifter of Glenfarclas in his suite at Pratt’s and to then retire to the kitchen for a drink with the Georges. A fresh blast of rain blew down over Christies and bounced off the front of the Golden Lion. He retreated to the shelter of a doorway and sighed. His breath swept out of his nostrils and hung in a brief mist before being beaten to the ground by the ice-sharpened rain. The things he did for the cause…

Monckton, meanwhile, was relaxing in front of the fire in his rooms at the club, sketching out some notes for the keynote he expected to deliver in Chicago in a few days. It would be a triumphant return, he was sure, though he thought he had detected some reluctance from his American comrades in arms in the great climate fight to pick up the tab for his first class airfare and extra baggage allowance. Perhaps Scrotum could travel in a trunk in the hold? He would phone British Airways in the morning.

Scrotum looked at his watch. A quarter past eleven. He snorted. Five more minutes, and he would be off. A soft whistle began to echo down the deserted street. The Third Man theme. Scrotum smiled and stepped out onto the pavement, but a hand reached out and grabbed his coat, pulling him back into the doorway. A voice hissed into his ear.

END_OF_DOCUMENT_TOKEN_TO_BE_REPLACED

Bad Behavior has blocked 814 access attempts in the last 7 days.